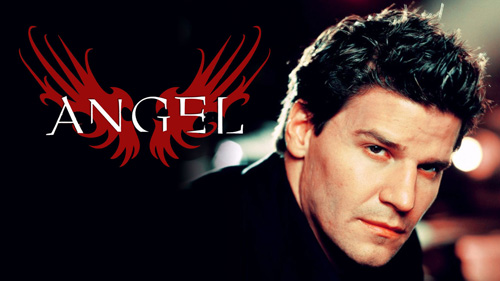 So, I have been re-watching the hit series ‘Angel’ Season 1, and remembering everything I loved about the series. Here are a list of my favourite moments.

“Not to go all schoolyard on you, but you hit me first!”

So apart from being an awesome Faith Episode and follow up to Five By Five, my favourite part from this is the Buffy/Angel interaction which culminates in him telling her off. HIGH TIME SOMEONE DID (if you’ve been watching Season 4 of Buffy simultaneously you’re REALLY glad someone did – or at least I was). Plus she is totally out of order having a go at him! I really feel for Angel when she digs the knife in with Riley.

What is incredibly annoying is that after this episode he runs off to Sunnydale to apologise (although he and Riley have a fight which is hilarious).

I much prefer this Buffy visit to the one in ‘I Will Remember You’ although it is lovely to see them have their final moment together again.

A very short lived character sadly. We loved the wily Irish seer, torn from us too soon. (Sadly Glenn Quinn died a dew years later) However they do say things are short and sweet, and series 1 did get much better after the departure but I’m still nostalgic for those few Doyle episodes. Only Doyle would nearly get his brains eaten by his ex-wife’s new fiancée!

ALWAYS a favourite episode includes the most excellent William the Bloody, if only for this dialogue.

[Angel has just saved Rachel from a violently abusive boyfriend, while Spike watches — and narrates — from the rooftop.]

Spike[as Rachel, falsetto]: How can I thank you, you mysterious, black-clad, hunk of a night thing?
Spike[as Angel, basso]: No need, little lady, your tears of gratitude are enough for me. You see, I was once a bad-ass vampire, but love and a pesky curse defanged me. Now I’m just a big, fluffy puppy with bad teeth. [Rachel sways closer to Angel; he steps back, warding her off with his hands.] No, not the hair! Never the hair!
Spike[as Rachel]: But there must be some way I can show my appreciation.
Spike[as Angel]: No, helping those in need’s my job. And working up a load of sexual tension and prancing away like a magnificent poof is truly thanks enough!
Spike[as Rachel]: I understand. I have a nephew who’s gay, so…
Spike[as Angel]: Ah. Say no more. Evil’s still afoot … and I’m almost out of that nancy-boy hair gel that I like so much. Quickly! To the Angelmobile — AWAY! [Rachel and Angel leave. Spike lights a cigarette.]

You can watch it below.

I absolutely love the introduction of Wesley as a ‘Rogue Demon Hunter’. This is where Angel starts to feel really complete. The addition of Wesley brought us some slapstick comedy, English style! What’s a vampire series without a watcher anyways?